“Your husband passed out at the bar. Can you come pick him up?” the bartender asked.   “Oh, and be sure to tell him he has to move his limo by 8:00 AM or it’ll be towed. He parked it crooked.”

As if she needed additional confirmation, the wife checked the other half of the bed and indeed found it empty. This wasn’t the first call of its kind. The wife told the bartender she’d be there soon before hanging up.

She threw on some clothes while her mind raced with possible solutions to the childcare crisis John’s fall from the wagon created. This was his fifth lapse in the three months since the baby was born.  Before JJ was born, John swore he’d stop, that things would be different.

John’s wife contemplated calling her parents to come babysit while she retrieved John. She checked the clock; it read 1:50 AM. She couldn’t call them at this hour. Besides, they lived impractically far.

John’s brother was still recovering from a recent car accident so she knew she couldn’t ask him to help. Nor did she want to disturb the neighbors. The wife decided she had to round-up the kids and collect John herself.  She’d have to drive everyone back to the house in the limo because if it got towed again, the limo service made it clear John would be fired.  That meant she would have to transfer the car seats into the limo.  But, how?  She resolved to worry about that when she got there.

The wife trudged down the hallway and stood between her children’s bedroom doors strategizing. Which child should be transferred to the car first? John’s haunt, The Attic, was only three miles away. It would be possible to drive to The Attic and back before JJ woke to be nursed so long as Christine, their preschooler, didn’t purposefully wake the baby to “play.” If Christine woke JJ, he would cry, Christine would whine, and the wearied wife might finally have that breakdown. John’s wife decided to transfer Christine first and hoped for the best.

The wife scooped up Christine but some of her limbs escaped and dangled as the wife padded down the steps and headed toward the garage.  She halted at the kitchen. John’s dinner plate, wrapped in plastic and topped with the sticky note that read, “We tried to wait. Heat in the microwave for about one minute,” sat on the table, unclaimed.  She sighed.

It was then that the wife suddenly remembered the four ounces of breast milk thawing in a pot of water on the stove top.  The wife had been pumping and freezing her milk hoping that John would relieve some pressure and feed (and bond) with JJ in the middle of the night.  He never did.  But, when John left for work earlier that morning, he had finally promised to feed the baby when he got home.  Now that the wife was undoubtedly awake, she intended to nurse JJ herself when they all got home. She mourned the breast milk expressed in vain as she first buckled Christine into the car and then went back upstairs to retrieve JJ.

After the beleaguered wife transferred JJ to the car successfully, the wife held her breath as the automatic garage door screeched up. She glanced back and confirmed both kids still slept. She backed the car out into the suburban night and headed toward The Attic while the sound of the crickets alone sung her praises.

As she drove past the lake between her home and the local tavern, she admired the reflection of the stars dancing on the water’s surface. At first glance, each individual speck of light could seem small and insignificant if considered on its own. But, she realized, each star is the center of its own solar system, sustaining many smaller bodies. One only needed to shift perspective to see the value of the individual pinprick of light.

“Where are we going?” The child blinked and rubbed her eyes.  Several palpable seconds ticked by while the question orbited the car. 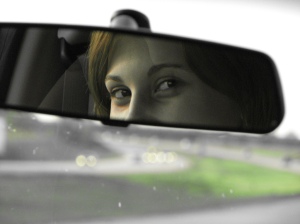 Alice glanced up into her rear view mirror and met Christine’s sleepy gaze. They both smiled.  “To Grammy and Grampy’s house, sweetie. Go back to sleep, it’s a long drive.”

Inspired by WordPress’ Weekly Writing Challenge to use five nouns from a list created by Ray Bradbury as inspiration for a new post and by yeah write’s weekly writing challenge prompt #172: Should I stay or should I go?

Boundaries and Edges – The Conversation; Thinking Languages! – Two For Eternity; Janey Does Blogging – The Ray Bradbury Noun List Twist; Silver Leaf Journal – When the Day is Done (I Will Miss); Love Letters to a Ghost – The Red Balloon; The Magzee – Summertime Sadness